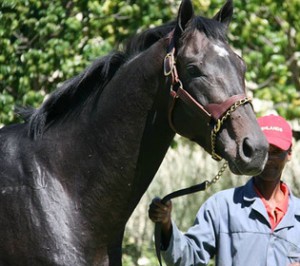 Jackson, who was bred by Highlands, was a top class athlete, who ranked as one of the leaders of his generation.
The handsome colt, who topped the 2010 Emperors Palace National 2YO Sale where he fetched R1 000 000, won or placed in 13 of his 17 outings and earned over R2.3 million.

He accounted for a number of outstanding performers during his career, with Jackson beating such G1 winners/champions as Variety Club, Pomodoro, Master Plan, Bravura, Princess Victoria, Martial Eagle, Slumdogmillionaire, and What A Winter.

Jackson’s dam Moonlit Prairie, a daughter of former US champion sire Cozzene –who also ranks as broodmare sire of outstanding sire Pivotal, has been an exceptional producer and has three graded winners to her credit.

She is a great granddaughter of the outstanding broodmare No Class, who is also the second dam of dual US champion sire Smart Strike, sire of champions Curlin, English Channel, Never Retreat, Lookin At Lucky, and My Miss Aurealia among others.

Jackson’s first offering at the sale includes a half brother to former Equus Champion 2yo Soft Falling Rain as well as recent Hong Kong winner Five Up High (lot 67), a half brother to brilliant filly Lazer Star (Lot 47), a three parts sister to G2 Fillies Guineas winner Alexis (Lot 175), and a half brother to G2 The Debutante winner My Sanctuary (Lot 203).