Klawervlei Stud’s exciting resident sire Pomodoro had an outstanding day at Turffontein on Tuesday when responsible for a trio of winners (from just four runners!). All three of his winners were trained by Sean Tarry (who trained Pomodoro) and all three were ridden to victory by jockey Raymond Danielson. 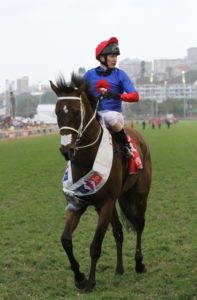 Promising first-timer Ballon D’Or ran on strongly in Tuesday’s first race to score an impressive length and a quarter debut victory  over 1200 metres. Despite racing a bit green, the Pomodoro colt quickened up smartly close home and drew clear to win smartly.

Out of a mare by Doowaley, Ballon D’Or races for Sean Tarry Racing CC.

Tuesday’s debut winner was a R140 000 purchase from the 2018 Klawervlei Farm Sale, a sale with a growing list of promising winners.

Ballon D’Or is the latest graduate of last year’s Farm Sale to win on debut, with the son of Pomodoro following the likes of Ballet Shoes, California Cool and Golden Belle.

The latter made it a double for Pomodoro on Tuesday, and maintained her unbeaten record, when she downed some talented older rivals to score a good win over 1450 metres.

Bred by Klawervlei Stud, three-year-old Golden Belle (a bargain R80 000 buy) made it two wins from as many starts when running out a clear-cut,1.75 length winner on Tuesday while stamping herself a filly to follow.

Her sire ended the day in style, when Pomodoro’s son Westlife ran on powerfully to land the eighth and final race at Turffontein impressively. Making just his second start, the colt ran on to break his maiden by half a length over 1600 metres, and the Guillaume Stud bred Westlife looks a colt with the scope to go on to bigger and better things.

The red-hot Pomodoro, South Africa’s Leading First Crop Sire of 2017-2018, is represented on both of the two upcoming Ready To Run Sales.

Pomodoro has two lots on the Emperors Palace Ready To Run Sale, a colt (Lot 131) out of a six time winning daughter of Captain Al, and a filly (Lot 140) whose 3 time winning dam is a ¾ sister to millionaire Mannequin.

The July winning son of Broodmare Of The Year Golden Apple has a single lot on offer at the 2019 CTS Ready To Run Sale – a filly (Lot 144) who is descended from champion filly Kiss Of Peace.