Boland Stud, who will once again be offering a quality draft at this year’s National Yearling Sale, are the breeders of one of the most impressive winners on Sunday’s Hollywoodbets Greyville card.

The Boland bred Bayview Express justified 9-10 tote favouritism when running out a facile three and a quarter length winner over 2000m on Sunday under inform jockey Anton Marcus.

It was no race half down the straight, and Bayview Express could have well gone on to win by six lengths under a hard ride!

The progressive Bayview Express, who has now won or placed in three of just five starts, had been second over 1750m at his penultimate start.

He is the second winner out of the Captain Al sired G3 Kenilworth Fillies Nursery runner up Captain’s Lullaby, who is also the dam of the talented G3 Tony Ruffel Stakes placed Vontreo, and Captain’s Lullaby herself is a half-sister to G3 Byerley Turk winner Mambo Mime and the stakes placed dam of classy filly Varumba.

Excitingly enough, Boland Stud will be offering a Gimmethegreenlight half-sister to Bayview Express at this year’s National Yearling Sale,with the 2020 National Sale set to take place in Germiston from April 22nd to 24th this year. 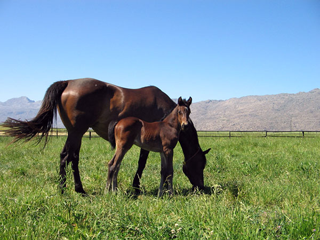